Home > History > Barry and 'the Boys'

There is no greater illustration of corporate America's moral decay than Amazon. Amazon fired manager protesting Covid-19 infections in warehous.e 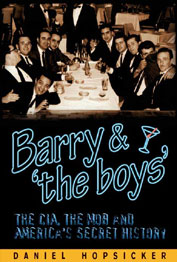 This is the story of Barry Seal, the biggest drug smuggler in American history, who died in a hail of bullets with George Bush's private phone number in his wallet...

The Wall Street Journal called Barry Seal the ghost haunting the Whitewater probe. He was far more than that.

Based on a 3-year long investigation, Daniel Hopsicker discovered the secret history' the American Press was afraid to tell Seal, the most successful drug smuggler in American history, was also - and not coincidentally - a lifelong CIA agent, one of the most famous who ever lived, active in everything from the Bay of Pigs to Watergate to the Kennedy Assassination. And all this before becoming famous for importing tons of cocaine through Mena, Arkansas in the Scandal that won't go away.

Ripping the official story' on the so-called Clinton Scandals to shreds, Barry and 'the boys' breaks the biggest scoop of all about the Arkansas Drug Connection: where the money went.

Or were the goings-on in Mena of Barry and the boys' just the continuation of business as usual?'

You'll discover why a young Arkansas Attorney named Bill Clinton signed a get-out-of-jail-free personal recognizance bond for Barry Seal, after Seal had been jailed for drug smuggling in Menain the 70's.

And you'll learn of the suspicious and long-lasting link between smuggler' Barry Seal and the Bush Family, Senior and Junior.

Most importantly, you'll discover why a photograph taken by a night club photographer in a Mexico City nightspot ten months before the Kennedy assassination holds the key to the shadowy organization responsible for the massive corruption in Bill Clinton's Arkansas twenty years later

Commenting on the CIA's affair with the Mafia, L.B.J.'s press secretary, Bill Moyers said, Once we decide that anything goes, anything can come home to haunt us.

After you've read Barry and the boys' you'll understand what he meant.

The Immaculate Deception : The Bush Crime Family Exposed
by Russell S. Bowen
The author is a retired Brigadier General who worked with the Office of Security Services (OSS).
Listed under George Bush