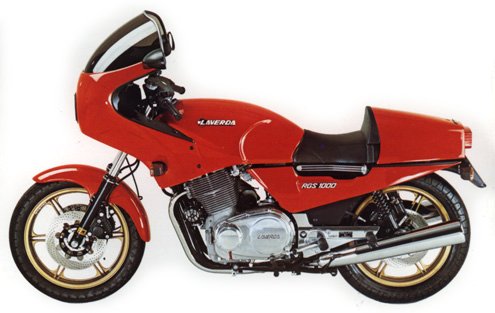 The RGS was released in 1983 with a new 120 degree crankshaft and sculpted bodywork. It had a new frame, lower seat height and a lower centre of gravity. The Veglia one-piece instrument cluster included a fuel guage, the bodywork was made from a new, highly durable "bayflex" plastic and incorporated a unique snorkel-type fuel filler arrangement in the front right fairing panel. It has become an enduring classic, and, with the the right tyres and in the hands of a capable rider, can still give modern sports machines a considerable surprise.

RGS1000 Corsa
Finished in black, with a claimed 94hp, 10 more than the standard RGS, and Brembo Goldline calipers and floating discs

RGA1000 Jota
Unfaired, normal filler cap, Nippon Denso instruments, bikini fairing. Otherwise the same as the RGS, with no performance enhancements to justify the "Jota" designation.  The RGA1000 was much the same as the RGA 1000 Jota, but with higher bars and no seat cowl.