BY a cool six mph, the Cotton "Conquest'' which Derek Minter and Peter Inchley took to a class victory in the 1965 500-mile race at Castle Combe, becomes the fastest 250 we have ever tested. It averaged 91.9 mph round the 3-mile banked circuit of MIRA'S proving ground. Previous best was the 86.0 mph of the Honda "Dream SS': However, this "Conquest'' is a road-going racer, with questionable silencing and primitive lights,  just conforming to Road Traffic Act requirements and production-machine- racing regulations.

High compression
It is basically a standard "Conquest'' as turned out by the Gloucester factory, but with the compression ratio increased from 10 : 1 to 12 : 1. The test "Conquest'' had bobby-dodger items such as feeble, direct lighting in place of the standard Lucas diode lighting and a bulb horn. Shod with racing tyres, it lacked centre or prop stands. It cannot be put into the same class as the fully equipped and well silenced 250 Honda. In fact, the Minter/lnchley "Conquest'' is in a class of its own. Orders for exact replicas have already been placed a provisional price of £370 including Purchase Tax.

Torque characteristics
Tuned to give rising torque all the way, the Villiers "Starmaker'' two-stroke single always reached maximum revs on any up-gradient which it was able to climb in top gear, This gave it a shattering motorway performance, leaving behind on the hills much faster cars capable of cruising at 14% mph and more on level roads. The Cotton climbed such hills at 85 to 90mph. It was cruised at full bore by the simple expedient of putting the throttle against the stop and leaving it there from London to the Midlands and returns except past motorway roadworks, This is a race engine, designed to be run at maximum effort, and it thrives on it. On downgrades the speedometer rose to flicker around the 114 to 116 mph mark, if the rider got his head down. This, after speedometer correction, would suggest a true 105. Owing to the engine's unusual characteristic of rising torque up to peak rpm of 8000, the machine was faster on a windswept timing lap at MIRA than it was through the one-way timing traps, the first time we have ever experienced this. This feature makes the engine rush up the power band once about 5400 had been reached. The acceleration was then staggeringly good.

Megaphonitis
Below this speed, and especially under 3500 rpm when bad four-stroking set in, the rate of rev rise, even in a low gear, was poor calling for much use of the gearbox to effect a cure. Flywheel weight was negligible. This, the lack of low-down urge, the exhaust note, made traffic riding grim. The Cotton needed a softer plug in London - and changing a plug meant some five minutes fiddling under the tank. By no stretch of the imagination can the Minter/ Inchley device be regarded as daily transport. It is in its element on the open road - and only on the open road. The motor was then untirable, free from vibration, and no thirstier than about 45 mpg. The fuel tank holds five gallons which is mixed with an R oil at 16 : 1. 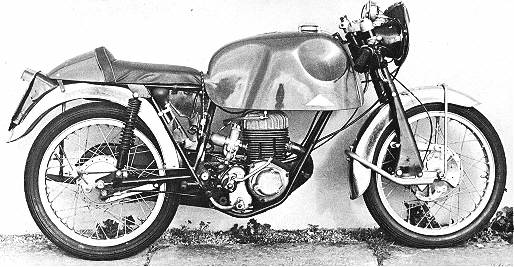 (Top right) The tacho drive is taken direct from the Starmaker Crankshaft. Cable into top of chaincase controls the diaphragm clutch. (Top Left) The 7 inch brake on the British Hub wheel has 2 leading shoes and a parallelogram reaction linkage. (Bottom left) Crank in the folding kickstart is to clear the reversed gear pedal which has up-for-up action. ( Bottom right) Distinctive finning of the later type Starmaker whose central exhaust port imposes severe frame constraints.