Triple Pete - The Man Who Fell to Earth 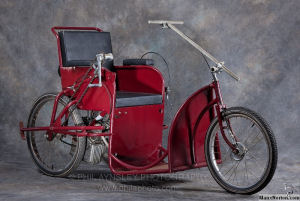 Actually, this is not Pete's wheelchair. But it does have a Ducati engine. We're thinking of something a little less conventional. The Petemobile may perhaps be a foot forward motorcycle with full joystick controls, and an adequate powerplant. Say a ZXR750 or a YZF600. Oh, and outriggers, and of course a towbar. For the glider.

PPP ... works, as we all did for a while and Billo still does, for the Hunter Area Health Service, at John Hunter Hospital, Newcastle's equivalent of Westmead: a pile of concrete exactly where the demographic centre and a public transport blue hole meet. This edifice is known to everyone in the Valley as 'the John'; if you doubt me, jump in a taxi up here sometime and try it. My reference to PPP's recent meeting with Energy Australia was lightly ironic, he said in the voice of John Cleese doing 'Cheese Shop'. Pete used to be an auditor for the tax department but left when the job no longer satisfied his bloodlust. ...
Al.

Turns out motorcycling is not high on Pete's agenda - he's much more interested in getting back on a surfboard.

Russell-san, a Peterboard is just what we've got in mind for him. Initially we were going to equip him with stump fins and velcro his torso to an esky lid (boogie board) but since he is determined to get back up on a short board, we are contemplating what is required to make plastic feet grip on wet fibreglass. This could make Astro Boy look asthmatic and kinky. This could leave all those ampu-erotic stories rolling in wet sand with the waves breaking over them. This could stop the grommets dropping in.

To your question on disabled sailplane pilots:

In Victoria we have a single arm pilot (name escapes me) who flew a Boomerang without change. Pat Larcey at one time had a Twin Astir being fitted for hand controls as he is in a chair -don't know if it got to flying stage. In SA the Adelaide Uni had an armless pilot who learnt to fly in the back seat of the Bocian and had an ES-59 Arrow retrofitted with airbrakes foot operated so he could fly solo. Some years ago Sportavia (Tocumwal) had a disabled persons course. I think they hand control fitted a Blanik.

(from my reading of overseas material in the Ferries-McDonald library)
In the US 'Soaring' has had a string of stories of a wheelchair bound pilot who fitted out an ASW-19 and flew coast to coast to raise awareness and money for wheelie organisations, including flying into a car race circuit to open the racing with an aerobatic display. He also flew x/c for a number of years. There are also odd other articles about retrofitting a Blanik to hand controls, etc.

In the UK there are a number of articles in 'Sailplane & Gliding' of retrofit of Bocian, K-4 and K-13 gliders for use by hand control.

Yesterday's mail brought a clipping from a friend dateline Katmandu, (apologies to Ted Nugent) Nepal with a photo of Mr. Whittaker standing on Everest. This 49 year-old professor (of what I have not a clue) who scaled all 29,000 feet of the mountain is, to my sometime cynical eye, a testament not so much to what amputees can accomplish but to the overwhelming resilience of the human spirit.

Whittaker lost his leg in a 1979 head-on car crash. And during this ascent he developed pulmonary edema, apparently common among folks who scale great heights.

His success on Wednesday was his third go at it and the first for an amputee. Bad weather supposedly killed his '89 & '95 attempts.

Kudos to this man. The news tells me nothing about amputation but a lot about what we can be if only....

Mein herr, I had the privilege of meeting Tom twice while over in Nepal recently. I may have mentioned a group of amputees and blokes in chairs with cerebral palsy, paraplegia etc. who with much support and many assistants were slowly making their way up to Everest Base camp. Tom, although a climber not a trekker, was associated with this group and we were all staying in the same guest house on several occasions. On the first of these I had just made a 7000' height gain that day (mostly by aircraft, I hasten to add) to 11,500' and was feeling the altitude; he came over to me and asked if I was alright and we chatted awhile, partly about PPP. On the second, I had just escorted a Canadian girl who was in poor nick with altitude sickness down from 18, 000' (leaving a Japanese bloke who died that night) in a snowstorm and ran into Tom and the group again. He was concerned about stump chafing ( he said stump ulcers had stopped him on two previous attempts of Everest) and it's good to see he made it this time.

The airstrip for the approach to Everest Base is one you'd probably like to do in the Grob, although it's not quite like Gloucester. The strip is at Lukla, a tad over 9000' AMSL. It's around 500 metres long, has a gradient of 1:8, 20 metres from yak to yak (ie, the Twin Otters which fly in there have 2 m. tip clearance either side), undulating and covered in rocks that act like a gravel trap, has a 3000' drop into the valley below one threshold and a 3000' climb to the local peak at the other, each not quite sheer but not far off. There are 25, 000' high mountains encircling it within a few kilometres. Every morning a howling katabatic sweeps down the runway for tailwind launch practise, and by midday there is a howling anabatic for tailwind approach practise.

It is entirely visual but base is commonly below airstrip height. I saw a Pilatus Porter, having glimpsed the strip, do its circuit entirely in cloud and emerge at the last moment for touchdown (splatdown is common). One couple I walked with told me they had a failed flight into Lukla the day before they successfully arrived, and spent an hour 'circling' at up to 60 deg. bank, fairly suddenly pulling up to 3 g. they thought, mostly in or above cloud with mountains looming close but far above them. Eventually they flew back to Kathmandu. There are a couple of dead Twin Otters by the strip to remind you, and bits of their carcases have been charmingly incorporated into fireplaces and hot water systems all around the village. Royal Nepal Airlines is not a signatory to any known air safety agreement in the world, and their baggage check lists 'torn/broken lock/missing strap/' etc. as though a full house of such woes is compulsorily acquired en route.

oompah bands, 2 litre steins and lederhosen to you, mein herr. 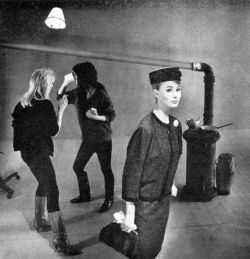 Kathleen Turner, playing a prostitute, dressed as an air hostess, in Crimes of Passion: "Would you like Pan-Am coffee or some of my TWA tea?"