Sweers Island and the Gulf, A Chronology
The Investigator Tree, Sweers Island
Burketown History, & other Gulf info
Flora and Fauna of the Gulf

Morning Glory Documentary
Rob Thompson's Morning Glory documentary is often seen on cable TV, on the National Geographic channel and others. The film features unique ground and aerial footage of the Morning Glory, and many of the shots are simply stunning. The documentary follows the activities of Dr Doug Christie placing meteorological instruments in remote Gulf locations, and sailplane and hang-glider pilots soaring the largest dynamic wave in the world.

Rob spent several months on location in the Gulf of Carpentaria in 1996 and a further 3 weeks in October 1997 filming the wave and the Gulf Savannah environment. The result is a credit to both his enthusiasm for the Morning Glory and his perseverance, considering the rarity of the wave and the harsh environment in which he was forced to work. 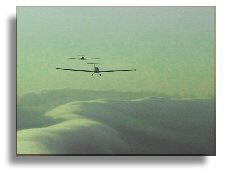 Dr Doug Christie is currently in Vienna working with the U.N. using the technology he developed studying Morning Glory waves to pinpoint nuclear blasts.
Doug Christie on the Morning Glory
http://rses.anu.edu.au/seismology/ar96/atmo.html (404)Doug Christie on Atmospheric Physics
If you like reading about fully nonlinear nonhydrostatic primitive ensemble-averaged equations, this is the place to go!

Professor Roger Smith has been studying the Morning Glory for 15 or more years. He currently holds the chair of meteorology at Munich University. He has quite a number of nice images of the Morning Glory, but his website has gone walkabout.

Professor Peter Saenger of Southern Cross University and Lynne Battle of Sweers Island have recently published  their work on Sweers biota in Australia Geographic.
Peter Saenger on Sweers History and The Investigator Tree

Gavin Pretor-Pinney of the UK and Australian photographer Barry Slade spent two weeks in the Gulf in 2004 filming and photographing the cloud and glider pilots. The results are stunning! Visit Gavin's cloudappreciationsociety.org
to read more about his adventures and download several movie clips.

An early mention of the Morning Glory appears in William R. Corliss' book "Handbook of Unusual Natural Phenomena". (Thanks to Sylvain Gravel)