Crocodiles and Other Fauna of the Gulf of Carpentaria 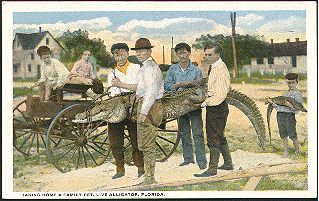 The Gulf of Carpentaria harbours two species of crocodiles, Crocodylus porosus (saltwater crocodile) and the relatively harmless freshwater variety. The latter usually only bites when handled or cornered, and the bite although nasty is rarely fatal.

Turtle Moons
A living fossil was recently found in Lawn Hill Creek.
The gulf snapping turtle (Lavarackorum elseya) has been identified as a denizen of the remote Lawn Hill Gorge in the Gulf of Carpentaria Savannah. The find is of major international significance as the turtle was believed to have become extinct due to massive climatic change during the Pleistocene age. Previously the only evidence of the ancient turtle was a single fossil found at Riversleigh.

Turtle - Lawn Hill Gorge
This photograph is of a turtle found in the Gorge in September 2001 near the Rainbow Serpent painting. The specimen appeared to be dying as it made no effort to move when approached very closely. Ants crawled over its head, and claw marks can be discerned in the treetrunk to the left of the front right appendage. Another turtle in fine condition was observed on the same day. (This is not to say that these turtles were identified as snapping turtles.)