Thanks also to the Royal Geographical Society of Queensland

Recent changes on and around the island

In 1934, the island was declared a 'reserve for the use of the Aboriginal inhabitants of the State', exclusive of freehold allotments in the town of Carnarvon and the access roads (Reserve no. 5599, Queensland Government Gazette 1934.2.344). However, such traditional enjoyment of the island was not to last: as a result of a severe drought in 1946 and a cyclonic tidal surge in 1948, all Kaiadilt people were re located to the mission on Mornington Island, where they remained. In 1960, Norman Tindale, with a party containing 20 Kaiadilt people, visited the Bentinck-Sweers Island area. Various archaeological investigations were carried out around Inscription Point and in the coastal area west of Inspection Hill (Tindale, 1962a; 1962b). Since that time, the Kaiadilt people have returned to residence on Bentinck Island, with occasional visits to Sweers Island.

In 1970, however, Southers and Dickens purchased freehold property in parts of the old township of Carnarvon, and the erection of a tourist facility was commenced by two young French adventurers (Jean-Jacques Amella, pers. comm.). Subsequently, these properties were purchased by Broken Hill South Pty Ltd, who investigated the island as a potential ship ping point for Lady Annie phosphate rock, and to facilitate this development, all freehold land within the town of Carnarvon, with the exception of portions 2, 3, 8, 10, 11, 12, 13, was resumed by the Crown in March 1971 (Queensland Government Gazette 1971.1.846-848). This was followed by a bio logical survey of the island in October 1973, as part of the investigations to assess the environ mental impact of the proposed port development. As a member of the survey team, the present author surveyed the mangroves and shallow water marine communities around the island. While the mangrove data were published (Saenger & Hopkins 1975), the 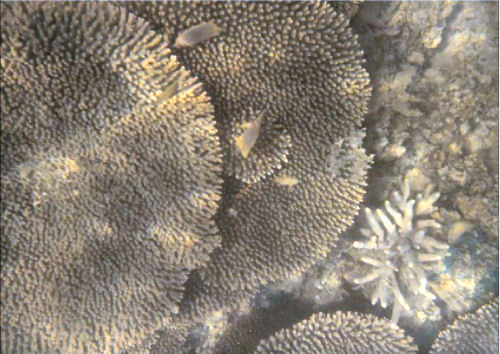 Figure 1: Plate-forming Acropora hyacinthus in shallow water on the southern shore of Sweers Island, October 1973.
remaining data remain unpublished, and have been summarised below.

The vegetation types were also mapped, and the map has been updated more recently, based on a SPOT satellite image (Figure 2, page 18) from 1990. Using a structural classification based on vegetation height and percentage cover, seven communities have been recognised, and brief descriptions, based on field surveys, are given below. The extent of these communities is given in Table 1 (page 19).

Two areas of dense vegetation have been mapped: one consists of tall, mid-dense stands of Corymbia grandifoliain the centre of the island, the other, immediately inland from the re sort, consists of lower, but dense, coastal vine-thicket, with scattered Pandanus and Celtis paniculata stands. 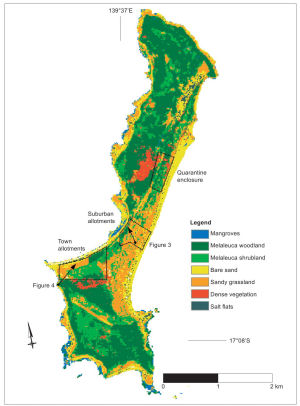 Figure 2: Vegetation of Sweers Island in September 1990, mapped from a SPOT satellite image. Note the site of the town and suburban allotments, as well as the quarantine enclosure. In addition, the locations and directions of the photographs in Figures 3 and 4 are shown.

This community type includes all of the beaches, occasional bare dunes and sand blow-outs. These areas are virtually devoid of plants, or have seasonal plant cover only.

Scattered stands of mangroves occur, in sheltered locations where silty-sandy sub strates are found. Rhizophora stylosa and Avicennia marina are widespread around the island. Aegialitis annulata forms dense stands, approximately 1 m tall, on shingle banks along the western shoreline.Lumnitzera racemosa is scattered around the island, but a dense stand, apparently the remnant of a more widespread mangrove community, occurs in drainage lines of the north-western part of the island. Scattered plants of Excoecaria ovalis occur along the western shoreline. Since the original man grove surveys in 1973, additional species have become established on the north-western shoreline on Sweers Island. Between 1973 and 1990, Aegiceras corniculatum became established (as did the cane toad), followed by Bruguiera exaristata between 1990 and 1994. Most recently, between 1996 and 2002, three plants of Ceriops australis have become established in this area. These species are common in the extensive mangroves of Bentinck Island,

Table 1: Vegetation types and areas on Sweers Island, based on remote sensing (SPOT 29/9/1990) 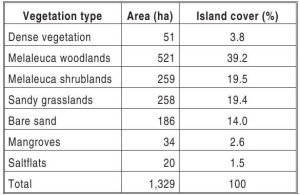 and it seems likely that they have colonised Sweers Island from Bentinck Island.